The Myth of a Rise in Crime

Sensationalized stories of crime are swaying the American public’s opinion of policing.

You’ve probably seen the headlines. “Bay Area crime wave! Shoplifting at Walgreens!” “Theft at CVS!”—the list goes on and on. But not only are these headlines built off of manufactured narratives, they’re also weaponized by a lack of context.

Fear-mongering about “crime” is a tactic that’s been employed time and time again by those who benefit from policing, upholding the system by criminalizing economic hardship. And right now, in a time of desperation, we’re edging towards a reality all too reliant on the carceral system instead of community-based solutions. 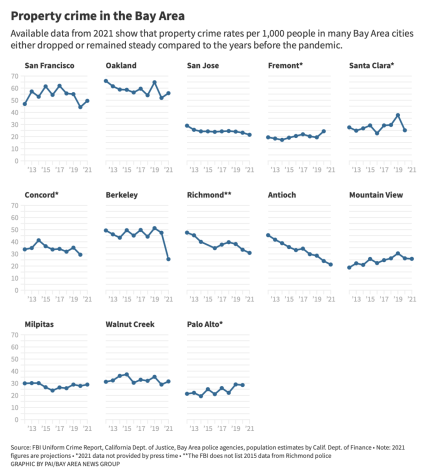 Contrary to popular belief, crime has dropped by almost 75 percent nationally since the 1990s. Statistics from the California Dept. of Justice further illustrate that property crime rates in the Bay Area have either remained stagnant or dropped since pre-pandemic times.

Yet many news and media outlets have largely disregarded these statistics in favor of headlines that successfully blow the issue out of proportion, to the point where nearly 64 percent of Americans falsely believe that there’s more crime in the U.S. today than there was a year ago. So why are these false assumptions so harmful?

Firstly, it’s a well-known fact that America’s system of mass incarceration disproportionately preys on Black and Brown communities. These myths therefore exacerbate the issue of already over-policed neighborhoods of people of color, increasing the population behind bars along racial lines.

Secondly, when the public is led to believe that locking people in cages instead of giving them care is the solution, we just funnel more money to institutions that only worsen the problem.

Thirdly, when cops, corporatism, and copaganda all rally around a narrative that criminalizes desperation in a time when the racial wealth gap is growing deeper and deeper, we lose sight of the main issue; that “crime” isn’t just a sign of individual wrongdoing, but of collective societal failure.

From a historical standpoint, “crime” has long been defined by America’s wealthy, who frame legality to target the poor as a means of upholding white elite supremacy. When this is clearly the case, we need to take a deeper look at what people are locked behind bars for.

When not only race but also socioeconomic status place you at a higher risk of being forced into the system, it may be time to reevaluate what we define as “crime,” and how our definitions harm the vulnerable in society. A “tough-on-crime” approach won’t actually address the desperation behind the unrest. Locking people in cages and relying on the police isn’t a solution that serves the common good; in fact, extensive studies have found that it’s not a solution at all.

As such, President Biden and Attorney General Garland’s 2021 decision to divert $350 billion in Covid-19 relief funds away from the people to police departments has little validity. The American Rescue Plan isn’t rescuing economically-impacted communities, helping people access housing, healthcare, and other resources—it’s just promoting the criminalization of the impoverished and furthering the desperation that is the source of crime in the first place, perpetuating a negative feedback loop.

People don’t commit crimes out of malice, they don’t take luxury purses or jewelry or coats for the sake of it. These commodities pay off hospital bills and rent, water bills and food. We’re distracted from the fact of the matter: that the economic conditions in the US are widening the gap between the rich and poor, that instead of taking care of everybody in our community during pandemic times, that we’re just criminalizing all the situations that should serve as signs that we’re failing.

We may be entering a new year, but continuing on a path of ignorance and internalized fear will only promote a cycle of punishment that cages people instead of providing them with compassion. We need to build our outrage against the cruelty of caging a person who is unhoused; those whose pleas make the rich uncomfortable. Against the threat of locking up a college kid trapped in student debt, a mother trapped in medical debt. The moment we stop criminalizing the vulnerable is the moment that we carry out compassion towards our community and the common good.