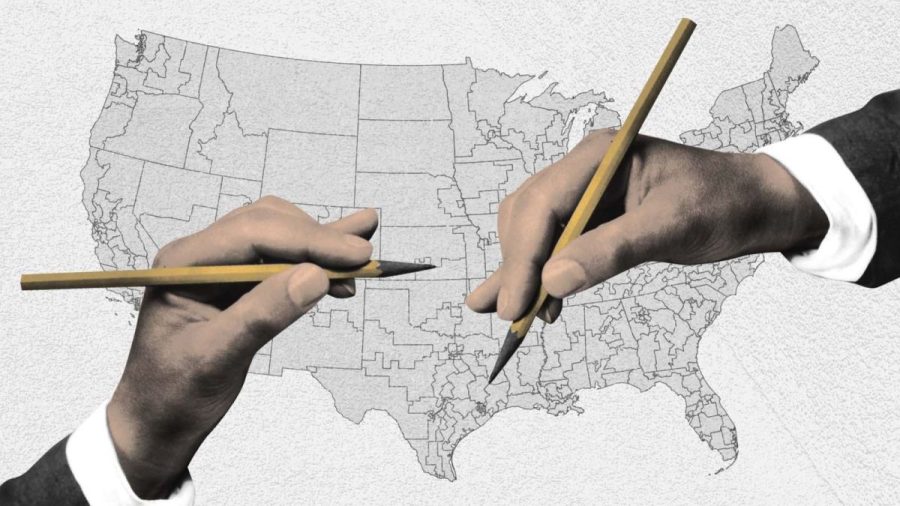 Student Activities has an important job for you: divide Mitty’s 1,750 students into 435 equal groups. Your decisions today are of critical importance; they will decide Monarch Madness themes for the next 10 years. Oh—and did they mention that, no matter what you do, half of the students will hate you after this? … Of course, Student Activities doesn’t actually need you to do anything. But the Constitution needs our legislators to do much the same, drawing the lines that will define the 435 congressional districts for the next ten years.

The Constitution mandates a national census every ten years to redistribute the 435 Congressional representatives among the states. However, once that data is collected, the Constitution says precious little about how states may go about drawing these lines. For the vast majority of states, this results in state legislators drawing the boundary lines for congressional districts.

But of course, the drawing of the lines is not happening in a vacuum, and legislators are powerfully motivated to manipulate these lines. By a practice called gerrymandering, these legislators are able to game the system so that their opponent’s power is minimized, in turn maximizing their own.

A combination of federal law and Supreme Court interpretation of the Constitution has supplied these basic guidelines for drawing boundaries: all districts must have near-equal populations and the drawing of district lines must not specifically disadvantage racial or language minorities. The compactness of the district, as well as its continuity, are not required by any law but are always considerations. California specifically also considers jurisdictional boundaries like county and city lines, but each state sets its own criteria.

Politicians are thus able to minimize their opponents’ power primarily by two practices: cracking and packing. Packing is the practice of minimizing opponents’ votes by concentrating them entirely in one district so fewer districts are competitive. Most often this is combined with cracking, the splitting of remaining opposition across the most possible districts to divide their influence. These practices often follow racial lines.

To further complicate matters, the Supreme Court ruled that it is out of the purview of federal courts to rule on partisan gerrymandering in Rucho v. Common Cause (2019). And in Shelby County v. Holder (2013), the Court struck down preclearance, which required the Department of Justice to approve changes to voting rules (including boundary changes) in states with histories of discrimination (including California). These decisions leave even less leeway for plaintiffs to pursue their case even as new algorithms make it easier than ever for legislators to test hundreds of maps.

Additionally, the 2020 Census saw California lose a congressional seat (bringing the state total to 52 districts) for the first time in the state’s history, as other states grew faster in the past decade. Despite this, California had one of the most successful and least acrimonious processes of any state.

Since the 1970s, in response to gerrymandering, states have taken the power to draw district lines away from politicians and put them in the hands of commissions. Currently, fifteen states have commissions responsible for drawing the legislative boundaries, while another six have committees that advise the legislature.

In 2008, California joined them, with voters passing Proposition 11, after the 2000 Census saw legislators from both parties work together to draw themselves safe seats. The proposition and a 2010 amendment established a fourteen-member independent commission to draw the lines, consisting of five Democrats, five Republicans, and four independents.

And on December 26, 2021, those fourteen commissioners were able to unanimously approve the new map. That process took place over nearly 150 live-streamed meetings, according to California Common Cause, which campaigned for the initial ballot measure.

On the whole, the new districts were less compact but did a far better job of not dividing cities. Furthermore, the new districts include six new majority Latino districts and one new majority Asian American district (up from ten and one respectively) in line with the goal of meeting Voting Rights Act Requirements. Additionally, according to an analysis by Five Thirty-Eight, the new maps are less partisan than the old maps, with the median seat being 3.1 percent more Democratic than the state at large as opposed to 5.2 percent under the old map.

That said, redistricting nationwide was not wholly successful and smooth. Of the fifteen states with commissions tasked with drawing the lines, only four (California, Arizona, Colorado, and Michigan) have independent commissions where the members are not politicians themselves or chosen by politicians. And across the board, commission or not, the number of competitive districts nationwide declined.

The Citizens’ Redistricting Commission had their work cut out for them—any way you slice it—but compared to the alternative, the unanimity and consideration of a range of factors are worth applauding.