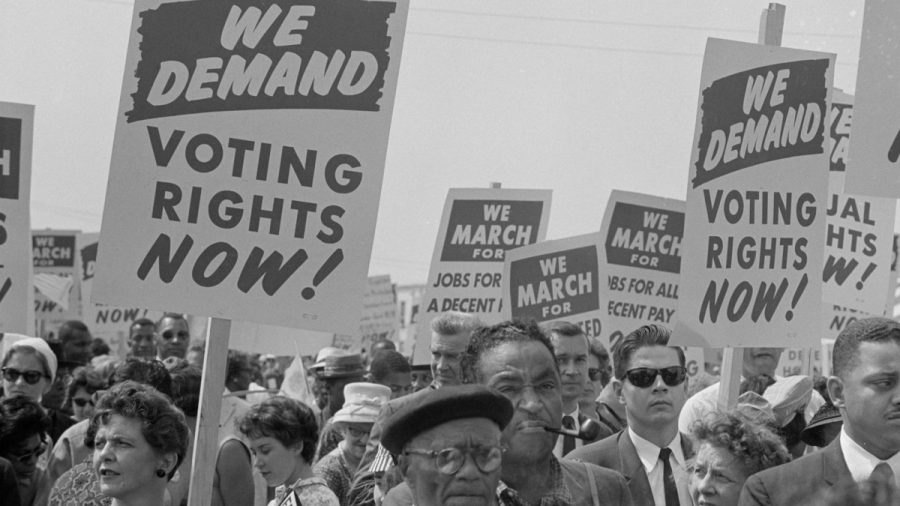 To fully honor MLK’s legacy, King’s children have asked Americans to participate in racial justice activism to achieve bigger platitudes like unity. Unbeknownst to many Americans, paying only lip service to King’s name is not true activism—urging the Senate to protect the voting rights of the disempowered Black and Brown Americans is.

Ultimately, King should not be the mascot for milquetoast racial apologetics who justify America’s glaring racial inequity. By only recognizing MLK for his powerful “I Have a Dream” speech, Americans oversimplify and invalidate King’s true legacy, which extends beyond dismantling Jim Crow segregation. Eleven months before his assassination, MLK confesses that his popular speech mutated “into a nightmare.” Fighting tirelessly for their constitutional rights, MLK and other civil rights activists have also continuously strived to obtain equal access to voting ballots in hopes of a true democracy.

For centuries, the American government has deprived marginalized groups of the constitutional right to a vote. After the Fifteenth Amendment extended suffrage to Black men, local districts enacted poll taxes and literacy tests to once again strip Black Americans from voting liberties. Advertently displaying racism and discrimination, many states would then enforce Black Codes to restrict the rights and movements of Black Americans; vagrancy acts also disproportionately criminalize thousands of African Americans into uncompensated prison labor similar to the dehumanizing structures of slavery. This intentional discrepancy reveals the weaponization of the Thirteenth Amendment’s loophole that enables “involuntary servitude” to be punishment for those convicted for crimes.

Through non-violent protests in the 1950s and 1960s, the Civil Rights Movement addressed the undisguised inequity and discrimination of America. Yet, in a 1965 national broadcast, police brutalized John Lewis (a former congressman and civil rights activist) alongside the six hundred civilians who protested the inequities of voting rights in a march from Selma to Montgomery. The ensuing coverage of this “Bloody Sunday”  garnered support of the American public and pressured the government to finally pass sweeping voting rights: President Lyndon Johnson signed the Voting Rights Bill of 1965 which terminated the continuous efforts to disenfranchise Black and Brown voters.

One of the key components to the new bill established that states with the highest records of voter suppression must receive pre-clearance from the federal government before passing any new voter restrictions. Dr. King himself considered the bill “a great step forward in removing all of the remaining obstacles to the right to vote.” Although the Voting Rights Act has been authorized and strengthened by a multitude of presidents since it was passed forty years ago, America is now witnessing the “the greatest contraction of voting rights since the end of Reconstruction and the beginning of Jim Crow,” according to Senator Chuck Schumer (D-NY). In response to one of Iowa’s restrictive voting laws (on early and mail-in voting), Sen. Schumer shares that “these [restrictive] laws carry the stench of oppression, the smell of bigotry.”

Racially motivated disenfranchisement occurs even today, as the United States continues to pass waves of voting restrictions and politically influenced redistricting proposals, specifically targeting communities of color. The John R. Lewis Voting Rights Advancement Act (JLVRAA) is proposed legislation that would restore and strengthen sections of the Voting Rights Bill, particularly the part that requires states to receive approval from the federal government prior to amending voting laws. The legislation would also set national standards for vote by mail and early voting, ban political gerrymandering, allow for automatic voter registration, and ensure consistency in who counts votes. Nevertheless, the JLVRAA has not been able to surpass through the Republican filibuster, thereby failing in the Senate in both the 116th and 117th Congresses.

In 2010, conservative political operative Edward Blum helped Shelby County Alabama sue the federal government, asserting that part of the Voting Rights Act was unconstitutional. The Supreme Court case, Shelby County v. Holder, ruled that the required formula for states to obtain pre-clearance from the federal government was outdated. As a result, state lawmakers across the country are now able to freely pass new restrictive laws around voting, such as shutting down polling locations in counties with high black and brown populations. Today, Black and Latino voters wait an average 45%  longer to vote than white counterparts.

These new restrictions are typically built on scare tactics surrounding voter fraud, but independent organizations like the Brennan Center of Justice have debunked these claims. A study established that out of 42 jurisdictions, only 30 out of 23% were non citizen votes—a total of 0.001% of votes reviewed. In lieu of false allegations of voter fraud during the 2020 presidential election, 48 states introduced at least 390 restrictive voting bills and 19 states have passed 34 laws in 2021 in predominantly Republican states.

Voter restrictions have historically had a significant impact on Black and Brown communities, and these discriminatory laws continue to plague our democracy today. By advocating in favor of legislation that prohibits blatant discrimination in politics and leading awareness movements, we can raise our voices for the national campaign to legislate, not just celebrate.