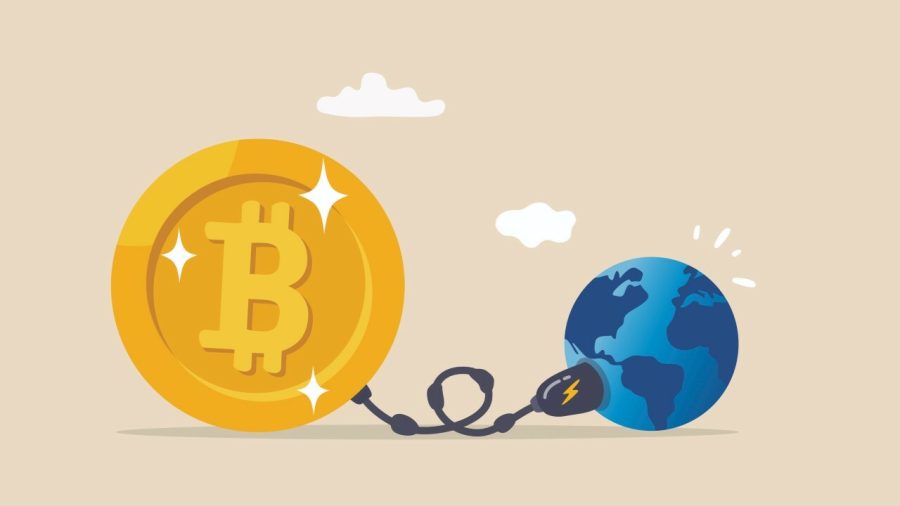 Bitcoin: How could something so intangible have such a large environmental impact?

The price of a single bitcoin has skyrocketed to tens of thousands of dollars in recent years, but in all the frenzy for this digital payment system, many overlook a grave flaw: the disastrous environmental impact.

The main reason cryptocurrencies were developed is because of their decentralized systems based on blockchain technology. Since cryptos are not issued by a central authority, they are essentially immune to government interference and theoretically won’t collapse at a single point of failure. Money transactions are cheaper, faster, and more convenient. Due to the cryptography used to keep transfers secure, the process is also private. All these advantages explain its growing popularity—but the true cost of crypto may be too much for our planet to bear.

So, how could something so intangible have such a large environmental impact? Crypto mining is the competitive process of minting new bitcoins into circulation, and since the system is decentralized, anyone who wants to earn money and has the required technology can mine. The full process is a lot more complicated, but in essence, miners must find a certain 64-digit number code and run it through an algorithm to generate the key that mints the bitcoin.

But here’s the catch: the computers use trial and error to guess the right number, so it takes trillions of guesses and an enormous amount of energy. Since the systems are decentralized and don’t operate through any trusted central system like a bank, a lot of extra computational power is required to maintain security. Since the energy comes primarily from non-renewable sources, the result is an astronomical increase in greenhouse gas emissions.

Taking into account the long, complicated system, its extensive security needs, and the added energy consumption from cooling the computers, cryptocurrency could be a major catalyst for global warming. For Bitcoin, the most popular cryptocurrency, these impacts are more than significant.

Bitcoin consumes about 707 kilowatt-hours per transaction. Bitcoin mining generates 22 million to 22.9 million metric tons of CO2 emissions each year—equivalent to the emissions from 2.6 to 2.7 billion homes for one year. In fact, a University of Cambridge analysis estimated that Bitcoin mining consumes 121.36 terawatt-hours per year, which is more than the annual energy consumption of Argentina as well as tech giants Google, Apple, Meta (Facebook), and Microsoft combined. Adding the annual 30 kilotons of electronic waste, Bitcoin usage alone—ignoring all the other cryptocurrencies out there—could push global warming past two degrees Celsius in just three decades.

If such vast usage of cryptocurrency is to continue at the current rate, energy consumption will most likely increase. However, the following list notes a few ways mining can be regulated or altered to reduce negative environmental impacts.

Pigouvian Tax Scheme (Carbon Emission Tax): A Pigouvian tax is an added cost to a product to balance out negative external impacts. In this case, a tax on carbon emissions from mining will increase the expenses of using fossil fuels and natural gas. Subsequently, the miners would be incentivized to switch to renewables, reducing the negative externality: carbon emissions.

Proof-of-Stake System: The current system is proof-of-work (POW), which means miners must compete to find the number code to unlock the crypto block. Essentially, POW is like a lottery that favors the people with the most computational equipment and power—and in turn, the most carbon emission—because they have a higher chance of computing the code. On the other hand, a proof-of-stake (POS) system would rely not on computational power, but on the wealth of the miner. Although POS is not exempt from its own flaws (such as favoring the wealthy), if implemented, the energy consumption would reduce by 99.95%.

Net-Zero Initiatives: Companies could invest in green initiatives which help reduce CO2 emissions. Although non-renewables would still be in use by cryptocurrencies, compensation with clean-energy investments may indicate a “carbon-neutral” future.

The amount of environmental damage inflicted by cryptocurrency is hard to ignore and even harder to solve, but if the system is substantially reformed, there may be hope for a future in which Bitcoin and a habitable atmosphere can coexist. As the American economy continues to expand and cryptocurrency grows in significance, it is imperative to look at both sides of the coin.