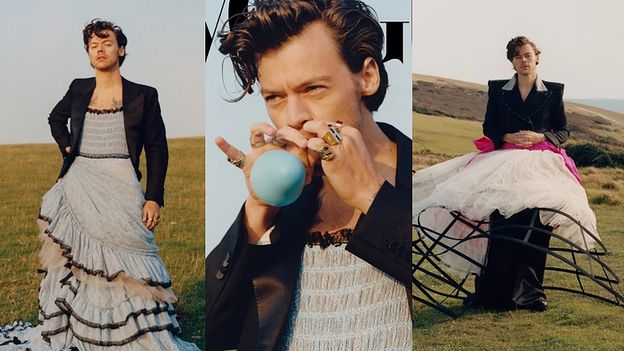 From working at a bakery to becoming an international pop star, the twenty-six-year-old Harry Styles has had many amazing accomplishments in the past decade. Recently, he became the first man to ever grace the cover of Vogue magazine alone. Not only is that a major achievement for Styles, but he is also sending a message to his young and impressionable fans: clothes don’t have a gender. Styles’ Vogue cover will most likely become an iconic fashion moment. Styles in the blue dress, however, has become well-known for a more important reason—and not just because people thought the outfits were “interesting.” Many celebrities have previously defied gender norms, so why should Styles’ Vogue look become iconic while others don’t receive a fraction of his attention for their contributions?

Sure, it is possible that Harry Styles’ popularity contributed to the celebration of his Vogue cover, but other famous celebrities have broken traditional gender stereotypes in fashion too. Billy Porter. Jaden Smith. Pharrell Williams. Prince. These men have all fractured the long-withstanding gender barriers but never received the recognition for it that Styles has. In addition to crossing gender boundaries long before Harry Styles, these men are all people of color. Now, I’m not saying they haven’t been recognized at all, but none of them were ever as highly praised for their actions as Styles had been. When Styles’ cover was released, many praised him for the photoshoot and referred to him as a “pioneer,” an unsuitable for title as he certainly isn’t the first to challenge gender boundaries in the fashion industry.

For example, Porter has never been one to shy away from extravagant items of clothing. One of his most notable looks was a Christian Sirano tuxedo dress that he wore to the 2019 Oscars. This iconic outfit was one of many that earned Porter a spot on numerous best-dressed lists, yet he never received the same praise for wearing a dress as Styles did. Some argue that Porter was one out of the various well-dressed individuals at the Oscars, while Styles was the only one who appeared on the December 2020 issue of Vogue. However, Smith appeared in a skirt for a photoshoot with Louis Vuitton, one of the largest luxury brands, and Williams appeared in GQ’s November 2019 issue wearing a yellow dress.

Furthermore, Prince has been recognized for performing in many outlandish outfits, ranging from crop tops to lacy blouses. Although he did receive attention for his style, Prince consistently sported these outfits to become renowned for his fashion choices, while Styles, only presenting one outfit, sparked many more debates about gender-fluid fashion.

Overall, it sends a greater message to people when considering Styles’ recognition and the others’ disregard: people of color don’t get enough credit for what they do. The media typically ignores the societal contributions of people of color but praises white men for doing the same things. There’s no doubt whether or not Harry Styles looked amazing in that blue dress, but the men that have done this before should be recognized for their contributions.